The most common question I’ve been asked this past week has been “What is the most I should pay for Mission Discovery: __________ on the GTN?” I’ve set out to tackle this question, but rewritten this post about a half dozen times as I reinvent the analysis as a new factor comes into play.  The first such realization occurred when I realized that Wealthy Yield missions have a critical result that is possible.  I had read many places that this did not exist, but I’ve seen it with my own eyes now and it does change the break even price you can pay for the Mission Discovery item on the GTN noticeably.

As the title suggests, this is Part 2 of a series of posts on Wealthy Yield missions.  If you missed Part 1, here’s a link to that post: Wealthy Yield Missions (Part 1): Unit Cost of Mission Discovery Item and the capstone Part 3 will be a summary of all of the Grade 11 Wealthy Yield missions expanding upon what is to follow.  This post will delve deeply into the calculation and conclusion for the Mission Discovery: Underworld Trading because I find it to be the most interesting and will hopefully foster discussion and critique to refine the modeling as needed before finalizing the other crew skill calculations and posting the final part of this series.

The result that most of you will be very familiar with is the standard return from the Underworld Trading Wealthy Yield missions Aged to Perfection and Smuggler’s Delight, which differ only in name as far as I’ve been able to tell so far.  The missions both cost 5,830 credits to run once the Mission Discovery item has been consumed and after a long mission your companion will return with the following materials in the first chart:

The source of my new knowledge of the critical chance for the mission was one occurring, which increased the results to the second chart:

Since the missions are orange in the crew skill interface, the base critical chance should be 10% and we will assume max affection for the companion running the mission, so total critical chance will be 15% for the modeling of the Mission Discovery’s value.  Since the only desirable materials in either list is the Doonium, my typical modeling of the values assumes that the other items will be sold at the vendor price, since that is also the price that GTN listings tend toward for items without meaningful player demand.  Here are the proceeds to be obtained from selling the standard and critical non-Doonium returns to the vendor: 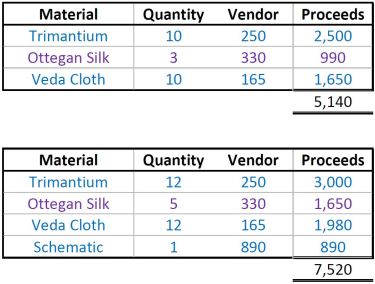 This is where this Mission Discovery: Underworld Trading becomes a model for discussion before I run this math across the board.  My inclination is to benchmark the Doonium price to the Blended Unit Cost value I’ve previously calculated from equal-weighting the Rich Yield and Bountiful Yield missions unit costs.  My thought process is that this is the opportunity cost of the wealthy mission because it needs to be at least as valuable as the Blended Unit Cost of Doonium net of the GTN purchase price, otherwise your time is better spent just running as many Rich Yield and Bountiful Yield missions as possible.  However, the two are obviously not mutually exclusive and there is a speed advantage to the Wealthy Yield mission since its standard successful mission return is a slightly improved version of a Rich Yield critical return.

The Blended Unit Cost of Doonium from prior work was calculated to be 3,139 credits.  Incorporating that unit cost point of Doonium with our liquidation value tables above and the 15% critical chance, the Mission Discovery: Underworld Trading can be purchased on the GTN for 10,000 credits and over a sufficiently large sample size the unit cost of Doonium will be the same 3,139 that it would have been from simply running Rich Yield and Bountiful Yield missions, but you will have more of the material you are most interested in obtaining because the average Doonium per Wealthy Yield mission comes to 3.30 while Rich Yield missions only average 0.6 Doonium per mission and Bountiful Yield missions only average 0.4 Doonium per mission.

In reality, the Mission Discovery: Underworld Trading can be purchased on the GTN for at least 20,000 or 30,000 credits and still make sense in situations where quantity is of more concern than unit cost minimization.  The average low offer to sell Doonium on the GTN on The Harbinger and Jedi Covenant is consistent about 6.0 times the Blended Unit Cost cited above, so even at 30,000 credits for the Mission Discovery: Underworld Trading you would still have the potential to double your money at the average GTN low offer price recently.

I am interested to hear your feedback on issues that you have with my methodology though because this is a difficult value to model given the many variables and alternatives to account for in the valuation model.  As always, thank you for reading because I’d have stopped writing these posts by now if no one was reading them!

2 thoughts on “Wealthy Yield Missions (Part 2): What is “Fair Value” on GTN?”